The last few days, the media has been trending on Aloysius Pang’s death.

When I first heard of the news, I was in school and back then, I did not know what happened exactly. All I knew was that he was going for his 2nd surgery. It was only towards the late evening that I read that he got into an accident while doing repairing works in New Zealand. Next day, I read that he was going for his third surgery and very soon… his deteriorating status and his death.

His death- was not I expected as he was still young at 28 years old. Healthy, optimistic young man…. I still was in denial and asked if it was a joke. Well, news began to broadcast of his death and even social media… okie.. it’s truth after all.

I have watched his shows ever since he came back to showbiz and I must say that his acting was getting better and better. It is really heartbreaking and he does not deserve to go yet. But nevertheless, GOD may have better plans for him.

Rest in peace Aloysius! You will always be missed and well-loved by us!

Today we dined at Yoogane at Bugis Junction. Just nice, they have this promotion where they are giving Yu Sheng free of charge. So five of us had our first prosperity toss! #littlemoment

Many things happened for the past 1 year and in fact, to me, it was of mixed emotions and different mentality. There were demises in the family, from hubby’s side and in fact, exactly 1 year ago, my grandmother in law passed away peacefully, while we were busy with my brother-in-law’s funeral (husband’s side). Two deaths between 4 days and we were really saddened by the deaths. DN entered into P1 and it was really a great transition for him and he is still struggling with his studies. Then, our 5th chihuahua, Moony left us, followed by the oldest chihuahua, Panda. With all those madness, I am amazed that I could finish my studies and obtained my Masters while doing a full-time job (at that point of time, I was doing my clinical lab MC job). It was tough as it was the project module. I took up a new portfolio and currently learning new things on the job, while being a CC. I have to manage OH too and I was guilty as I did not take leave to spend time with my kiddos during their December holidays. I promise I will make it up to them. Another 9 more days mark the start of OH. I hope everything will go smoothly and not have any hiccups. I look forward to the end of it, so that I can focus on my current work goals.

Screen time to the boys is more important than lunch with parents….

Okie…my domain skyzcandies will be down and I don’t think I will be renewing it for the time being till I feel that my blogging is more frequent.

Hubby thinks it’s a waste of money to spend on the domain, well….

I guess it’s good too, since on wordpress.com, I can continue to go to the reader section to see updates of the people I am following. It will sort of encourage me to blog too, I believe.

Not sure why…but it seems that Jetpack has some issues installing into my self-hosted site.

from my husband. Happy to the max! Though at times, the connection may drop… but I like the fact that when I removed it from the case, iPhone will sense it. If I take out one of the AirPods from my ear, music will stop. One more thing, battery charges very fast! 😉

While teaching Professional Practice and came across a topic on death… the quality of life… it really is a perspective which relates to age very much. When I was 20, I did not think much but just looking into a new chapter of discovery of life, setting up family, having my own house, crafting a career. When I was 30, it was all about breast milk vs formula feeding, checking out milestones of kids and yes, career is still a part and parcel of life. Hearing from friends about their 40s lifestyle… it seems that everything is all about families and death…. kids are still the topic but less emphasis. Career- have or not is less of a priority as long as one is contented and enough to sustain the family. Those in their 50s are more of finding a niche in the family, hoping their children have more time for them and also having more of their “me” time, re-discovering of new interests, etc and social life. Career is nothing coz that’s also the time where organisation will not place much emphasis on this category of workers.

Life- focus on your family. Focus on yourselves. Work is work, no one is indispensable. At the end of the career, it’s your family whom you want to spend time with. If most part of your family life is spent on work, your family members will not see you as being part of their life.

How I wish I can finish reading up my papers and write my 6000 words assignment. Complete it and that is it. I want to simply enjoy my nov-jan months as it consists of anniversaries, birthdays and Xmas + new year day!

Taking a distance learning programme is definitely tough. Though everyone will think it’s relatively easy but the discipline part is the toughest. No contact hours but requires you to read up articles per week and well, the most dreadful thing is when you fall sick (which currently I am nursing a flu) and the deadline is just 8 days away.

I have emailed my lecturer to inform him about the state I am in. Feeling a bit feverish and a painful throat. I am prepared to lost the 5% of the marks but I am really too tired to read through the night. *dismayed* but what Can I do? Housework+ kids minding+work just suck my energy away.

Young DN has officially graduated from his kindergarten and I have no more young ones in the kindy system. Time flies actually, to see your kids growing up every day. No wonder, friends have been telling me that it’s worthwhile to spend time with your kids when they are below 7 years old. As parents, we should be playing with them, rather than letting them playing by themselves, with us supervising their play. We should not be around them, but present in their lives with them so that they will remember us when they grow older.

I actually do agree with this statement.
I once read a story of how a child who spent his childhood in childcare and when he grew up, he put both his parents in day care. The reason for him putting them in daycare(even though he could afford a helper to tend to their needs) was that he has no time to care for them. That was the same view expressed by his parents when he was a child.

Nevertheless, DN performed his best today and we were delighted with the performance from the children. I did not expect it to be so grand.

DN on the stage receiving his certificate. 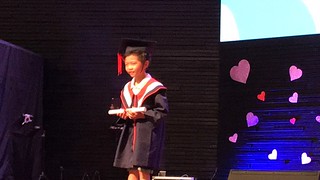