Hi, I am Ally, a full time working mum and have been blogging since 2004. The reason why I blogged before and now have a different focus. In the past, I used to blog about daily mundane tasks that I had been doing and I thought it was sort like a documentary of my life. However, as years passed and started my family, my focus changed and decided to blog about my little journey as a mother and a full time working mum. I wanted to share my experiences nurturing my little ones and the experiences I had so that it will become one of my memories in later part of life. Likewise, I hope to meet more parents and exchange our views and experiences.

Sometimes, I may be busy with work, thus I skipped some of the milestone of my kids. However, with 2016 starting, I really hope to update as regularly so that I won’t be missing any important event or a simple snapshot in my journey as a mother.

Happy new year everyone! May all your wishes come true and good health to all!

YEah! I am so thankful of the results I got for my module.

I would like to have a better time management and do more readings for my next module.

Having some sushi dishes as a form of celebrating my end of course run and also having the kids out on their no school days. Enjoyed ourselves tremendously. #moments 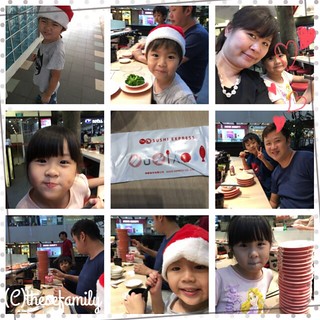 Today is our 16th Anniversary. This 16 anniversary marks the date where my husband and I met. 16 years ago, this date coincided with Deepavali.

I remembered that a few days back in 1999, hubby and I have communicated through sms text after he came back from his army trip to Thailand. We arranged to meet up on 7 Nov 1999 at Woodlands- Causeway Point’s Burger King at 2.30pm (if the time is correct). However, I was at my Indian’s friend’s place as she had invited us over for a simple lunch. I was late for our appointment as I left my friend’s house at a later time and I even told my friend that I was meeting him. My friend wished me luck and off I went to meet him at Causeway Point.

When I reached, there was no one in sight. Quickly, I took my phone and texted him where he was. At that time, I saw a middle-aged man took up his phone and read….*my mind went into palpitations…what if it was him, should I run? Those were the questions in my mind.

After a while, a young men dressed in his black armani T-shirt said “hi” to me. Shyly, I introduced myself and we decided to go to Burger King to have a simple tea break but it was full set meals. We chit chat a bit and after finishing our lunch, we decided to walk through Causeway Point mall. We walked past a Neoprint machine ( popular photo taking booth machines in those days) and decided to take a picture of ourselves.

As he had to meet his friends in the evening time, we decided to go back. That was around 5.30pm. We parted ways at the MRT platform and communicated though text. He messaged me that he was sorry that he could not send me home. I told him, it was fine.

At that time, we arranged a time to chit chat in ICQ- 9pm was the chatting session.

Over ICQ, we chatted a bit and he asked me to be his gf.

I thought it was fine and I decided to try, so I agreed. It was not desperate, I swear.

So this is how 16 years ago, we became an item. The journey definitely was not an easy one since we both have our different point of views and ways of doing things.

However, during these 16 years, we know how one thinks/feel…call it telepathy but we felt comfortable being with each other and tries to complete each other sentence without much difficulty. 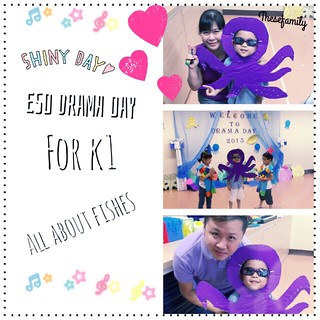 After weeks of practice in their speech and drama class, our DS has finally got a chance to showcase his acting skills. In his role, he was a wise octopus. He managed to pull off his speech in front of a crowd- made me proud and was cool about it.

However, the headwear was slightly heavy for him, hence he was unable to move freely as he wanted to be for fear of dropping off his props.

Nevertheless, mummy wants to tell you, you are a brave, handsome boy.

A few months, or probably many moons ago, I decided to call it quits after I could not maintain my Skyzcandies site as I was so busy with my work.

Numerous times, my heart itched to go back to blogging but the brain told me not to do so as I do not have time on my hands to play with. Moreover, there isn’t anything for me to blog about and who cares to read about my blog. It’s a dead end anyway.

After pondering for a long long time, today, while I was doing my work, my hands started itching again and there I was, trying to find a new domain name!

Surprisingly, the domain name was not taken and I quickly signed up for it. Happy as I was, but yet, I have concerns whether I could upkeep the blog or not.

That was the first thing on my mind.

Secondly, do I want to import my old entries back to this blog? Seriously, a big part of it since, 2008. I am still thinking about it since I guessed many photos would not be available already and I would think it would be good to start a new one.Perhaps, as times go by, I might recall certain details and blog about it. It would be neat.

Thirdly, I have decided. Whether anyone is or not reading my blog, it’s not gonna be a big issue to me as my plan is to give me a virtual space for me to pen down my thoughts and perhaps, some events/happenings for me to write about so that, in future years to come, it would re-live some of my memories. Well, you never know, when amnesia could come knocking on your door. Or perhaps, dementia……