daily, Little Moments, My Fancies and Likes, My pet, photography

My betta fish, a.k.a fighting fish comes in a deep blue scales with a red hue in the middle of the body. He was given as a X’mas gift by a colleague last Dec. It came as a surprise (well, actually not really as another colleague told me I would be expecting it).

Before Chinese New Year, I helped my colleague to take care of her betta fish but it went to the rainbow bridge on the 1st day of Chinese New Year. Frankly speaking, it is not auspicious to have a death on the first day. However, we treated as though nothing happened and went on with our visiting. To the Chinese, it is a taboo to talk about death. But I did informed my colleague in the late evening so that she knows that her betta fish was not around. Till now, I am still curious about its reason for death.

Since the first day of Chinese New Year, I noticed that my own betta fish ‘Baby’ became less active and does not blow any more bubbles to make his nest for matting. He does not eat and his colors on its little body were sort of like fading. He does not have appetite and looks really disinterested in whatever was happening around him. It went on for a few days and I decided I should find out what happened. Afterall, I am not an expert or someone who is good with fish.

Google is really a great help and I have this gut feel that it has something to do with its water. I also noticed that whenever I changed the water, he would be active initially and gradually went back to its inactive stage. On Sunday night, I knew I have to do something about him. It was such a last minute errand and I was sort of reprimanded by hubby about it. The kids were not bathed yet, my task of sweeping and mopping were not done and the kids had to prepare for school tomorrow.  I felt bad actually, but really, my betta fish’s life is more important than any other thing.

I put in the multi-function solution which has anti-bacterial properties, nitrate removers, enhancing its colors etc. I also heeded the advice of the fish shop boss to refrain from feeding him, just in case he is constipated.

I just checked him, it has been 2 days since I put in the solution and no food.

I am glad to say that he is more active, able to eat and play happily whenever my fingers were near him.

This is a picture of my betta baby. 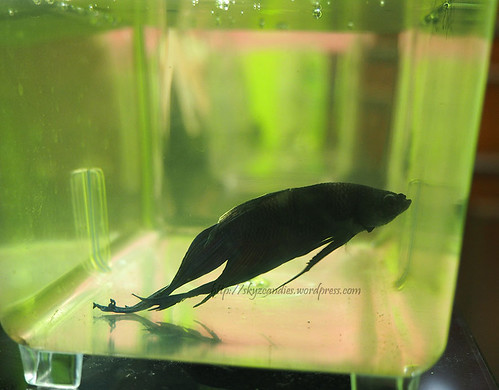 Not taken with any flashlight from the camera. 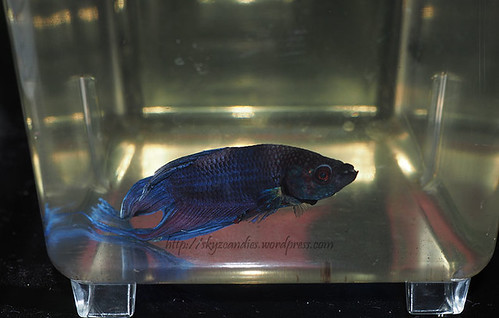 I hope he will make a complete recovery soon and being playful again.